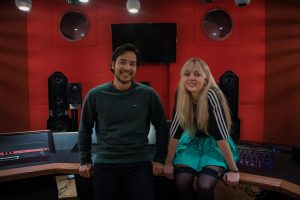 Music is always around me. I live in Rotterdam and that is really a place where many musical cultures come together. From urban to techno, from Latin to funk. As a DJ I regularly perform in clubs and festivals. When I see people go wild, a special energy is released. Not only with the people on the dance floor, but also with me behind the turntable. The love you feel when everyone comes together makes me really happy.’

‘Because of corona, the number of performances decreased and I was more on my own. Tim Toth from CTM said Wisseloord Academy was something I should look at, because he really thought that it was something for me. And he was right. By constantly working with different people at the Academy, I get into creative flows more often. And making beautiful things becomes easier.’

‘Around 2016 I started producing my own songs and I am getting better at conveying an idea or a feeling in a song. My challenge is that I’m setting the bar very high. I compare my productions with top productions by great artists, often involving entire teams. Now I’m starting to believe more and more that I can do what they do. I would prefer to release my own songs and show them to the public. That everyone is going wild on my songs. That seems so cool to me.’

‘I think the most important thing about a song is that you are able to convey your own, recognizable energy. Now music is moving rapidly around the world, I think that it has become even more important. A song of mine will often be energetic, positive and ‘uplifting’ and with my best songs you can hear the joy with which I made it. You see my smile when you listen to it.’

My first single will be released soon, which I will also release under my own name. I made the song ‘Sugadaddy’ together with Petra, who really has the perfect voice for this song. And thanks to the honest feedback – we get from teachers there – I can take production to the next level.”

‘At Wisseloord Academy, I quickly realized that I would become a better producer and musician/songwriter if I collaborate with other people. I love working with authentic people who have something beautiful to say and meet new people at writing sessions. In five years I hope to do what I already do now, but on a larger scale so that I can bring joy to more people with my sound and energy.’

For more information about Richie: www.instagram.com/djrichielee