It might seem obvious, yet it is good to realise that your microphone choice has a massive impact on your recording. If you know the characteristics of each type of microphone, you can make the right decision for any recording.

How does a microphone work?

In essence each microphone is a transducer. A transducer is an electrical device that transform energy from one form into another form. In this case the microphone transforms sound (AKA acoustic energy) into an audio signal (electrical energy).

As you might know sound is nothing more than a change in air pressure. The one component that all mics have in common is the diaphragm. When sound hits the diaphragm it vibrates, and that vibration is transformed into an electrical signal.

This basic knowledge of physics everything you need to know as a beginner musician, singer or producer. 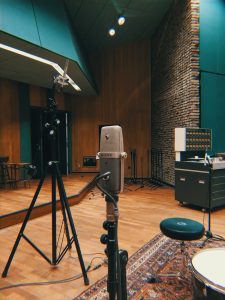 The choice of microphone is seemingly endless. Each one has its own characteristics. Yet they all fall under the same three categories.

If you think of a mic, you’re probably thinking of the archetype of each mic: the SM58. That mic is such a good example that everybody probably has seen one of them at some point in their life. A dynamic microphone is the most common type of of microphone. They are relatively cheap and can be used in both studio as well as live settings. They are sturdy and durable in all kinds of situations.

They are also less sensitive than a condenser mic. They pick up less details and are therefore more used in live settings than in the studio. Yet they have their use there too.

The condenser mic is the go to mic in every studio. They are sensitive mics, ideally suited to capture every tiny detail. For this exact reason you’d probably refrain from using a condenser mic on a stage, because it will quite easily create feedback.

A large condenser mic picks up the full frequency range, which often is an advantage, but sometimes is not.

This final category of mics are less commonly used, but they have there use and strengths nonetheless. Ribbon mics are relatively expensive and very fragile. More strongly put: where condenser mics net phantom power to work, you will damage a ribbon mic if you put +48v through it.

The name ribbon mics comes from a metal ribbon suspended in a magnetic field. This ribbon is the transducer that transforms a sound into an electrical signal.
Ribbon mics are usually a bit less bright than condenser mics, and that is why they are so coveted. Higher frequencies can sound more soft and recordings can sound pleasingly warm.

Because they don’t produce a lot of gain ribbon mics often need an external preamp to get enough volume out of them.

Not every mics picks up sound in the same manner. There are many different pick up patterns (or better: polar patterns), that all have their use.

Every microphone has its own sound. It is common sense to have a good look at the frequency response curve of each mic before using it. A microphone can often complement or aggravate a sound. You wouldn’t want to give someone with a harsh vocal sound a bright microphone, because that would only accentuate the problem area’s.

There are hundreds and hundreds of options and not everyone has the luxury to be working in a studio or to have a big mic locker at home. Therefore it is good to know what kind of microphone you need before buying one. What do you want to record, in what room, and what sound do you have in mind?

Do proper research, but even better, just try them!