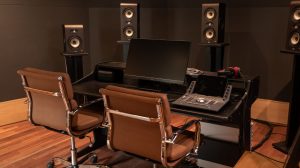 As soon as you get to a certain level with your music and want to have it mixed and mastered, you will encounter the term LUFS. LUFS is a way of measuring the loudness of your music. If you understand this, you might also understand why you have to turn up your volume when listening to certain tracks, even though you didn’t change anything at first.

LUFS stands for Loudness Units relative to Full Scale. It is a standardised scale based on how people perceive the volume and energy of sound.

This scale is used worldwide to get a consistent result on TV, film, radio and streaming services.

It might sound complicated, but as a music producer it might benefit you to look into it.

Without you even realising it, all professional music and sound you hear in your day to day life is measured alongside this scale.

Mastering and mixing engineers and producers try their best to get their tracks to sound as consistent as possible on every medium. LUFS is one of the criteria how you can measure the quality of your track. This way an engineer will have better insight in how your track will translate.

The biggest issue with getting consistent results is loudness. It appears to be more difficult to get your volume the same on each system.

If you think about loudness you are probably thinking of decibels, but that isn’t the entire story. Loudness has mostly to do with your perception of sound and how the energy of a track is divided over the frequency spectrum.

Because not everybody is or as to be educated in psycho-acoustics, scientists came up with a scale that combines the intensity of a signal with human perception: LUFS.

Integrated LUFS, or integrated loudness, tells us something about the overall loudness of a track. It takes the average over the entire duration. With just the peak and RMS meters of your DAW it is often difficult to measure the loudness of your full track, since both peak and RMS meters are momentary values: a snapshot. Integrated loudness tells us something about the full track, and it is for that reason that film and TV, but also streaming services maintain standardised units of integrated LUFS.

Momentary LUFS is the shortest value in terms of loudness. If measures the loudness of the last 400 milliseconds of audio. You can slightly compare it to the peak meters of your DAW.

Why should I bother?

With the rise of the CD, music labels wanted their music to be louder than that of the competition. Because louder music was thought to sound better, but, more importantly, would lead to more sales. Enter the loudness war.

The streaming services managed to reign in the battle for loudest track, by setting specific standards of LUFS for their music. No matter how loud you would master a track, a streaming service would still turn it down to what they deem appropriate. Also see: https://www.loudnesspenalty.com

If you understand LUFS, you also understand loudness isn’t only related to gain. A good mastering engineer knows exactly how to get your track to a professional level.

Yet don’t get to hung up on this concept as a music producer. In the end it is about making your track sound great. If that means just turning up the volume, then why not just do that?