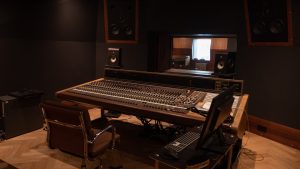 If you, as a producer or artist, want to record something with several musicians at the same time, you will sooner or later have to deal with a music studio. A music studio is especially equipped to provide optimal acoustics for an audio recording. Unlike a home studio, no expense has been spared to record the sound of instruments or singers as properly and consistently as possible.

A good recording starts at the source.

It sounds like an open door, but the saying exists for a reason. Singers or instrumentalists need to be warmed up and relaxed in order to perform at their peak level. Instruments, from grand pianos to guitars, must be tuned. Even a drum kit has to be tuned to match the kit with the track.

Many studios have asymmetrical walls and ceilings. This is to avoid reflections and build-up of low frequencies. 90 degree angles are often filled with bass traps. The walls also often have special acoustic panels or acoustic treatment to reduce reflections and to get the purest possible sound delivery. Some larger studios have different spots in their studio for either a more lively sound with more reflections, or a dead end, where the sound will be as dry as possible for a clean recording. The placement of the instrument is important for the final sound.

A good studio has a collection of high-end microphones that the home producer or studio will never have. Large diaphragm microphones, tube mics, ribbon mics. All microphones with their own sound and characters. It’s important to have a good idea of how the track will eventually sound. With the microphone selection you can already steer the instrument in a certain direction.

Perhaps even more important than the microphone choice is how they are placed. It often helps to stand next to the instrument when the musician is playing on it. Where it sounds best to you, it will also be the same for a microphone.

Do you move closer for a close mic’d sound, or do you back further away so you can better hear the studio acoustics.

Larger studios generally use patch panels. Via these panels you can determine where the recorded signal goes. You can send the signal directly to the console, but you can also choose to use external preamps or outboard gear such as compressors.

Before the sound ends up on the studio computer, it has to run through the console. The console has its own effects and control section, from preamps, to gates, compressors and EQs. With the preamp you determine how loud the signal will go into the console in. You can use high quality preamps to color the signal. You do this by turning up the gain so that the preamps will saturate the signal slightly. With the gates, compressors and EQs you can edit the sound before you record it. Often you try to keep the choices subtle, because there is no possibility of going back once recorded.

When the track is finally recorded, the actual work on the track has yet to start. You have ensured that the source sound has been transferred to the DAW in the best possible way. It is now up to the producer or mixing engineer to turn it into a track.